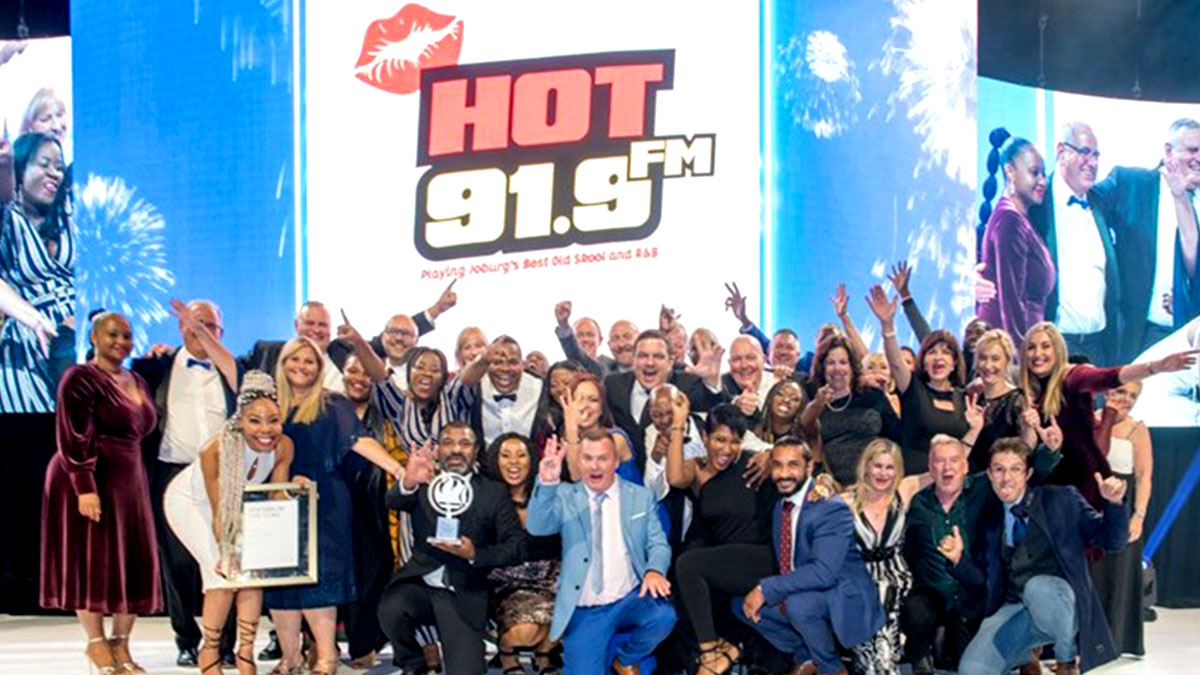 Hot 91.9FM scoops Station of the Year for the 4th year in a row!

For the fourth year in a row, Joburg`s hottest station Hot 91.9FM has scooped the prestigious STATION OF THE YEAR award at the 2020 South African Radio Awards on Friday, 17 April. This is a landmark achievement considering the station has won this award every year since 2015.

Added to this, Hot 91.9FM won another eight awards including the MY STATION accolade which is given to the radio station with the most loyal listeners. The litmus test for any radio station is its appeal to its audience. Station loyalty is of paramount importance to a radio station and is perhaps the most important aspect of broadcasting.

A ship is only as good as its captain, and Lloyd Madurai, Managing Director of Hot 91.9fm has steered the station from inception in 2014 to the multiple award-winning business it is today. His vision for making a meaningful difference in the community has paid dividends. He firmly believes that ‘the future for Hot 91.9fm is so hot, you are going to have to wear shades!

Hot 91.9FM’s flagship show Mansfield in the Morning, once again proved to be Joburg’s most popular breakfast show picking up both Best Presenter and Best Breakfast Show awards.

Reacting to the impressive array of awards Hot 91.9FM Managing Director, Lloyd Madurai, said, “What brings us to the finishing line every year, is Hot’s total commitment to our audience and community. It is our combination of world-class entertainment and social engagement which is a testament to our station’s passion for radio and our core values. We are blessed to have some of the greatest radio talents in our country, some of whom are graduates of our landmark Radio Academy”.

Station of the Year (Community)

For the 4th year running, Hot 91.9FM bagged the highly-coveted Station of the Year title in the Community Radio category. This award bears testimony to all that Hot has achieved throughout the year – from its various community engagement projects aimed at making a meaningful difference in the lives of those around us to the line-up of shows and, of course, the great music it plays every single day.

My Station – Most Loyal Listeners

The My Station Award recognises the listener’s choice and we are proud to be this year’s recipient which underscores our core value of ‘listeners first’.

During his 20 odd years in breakfast radio, Jeremy Mansfield embodies the adage “the master has failed more times than the beginner has even tried.” As the flagship presenter of the radio station, Jeremy sets the tone and style for the rest of the day’s broadcasting effortlessly. His wit, charm, easy confidence, and verve, as well as his infectious laugh and larger-than-life approach to radio, have seen him become one of Johannesburg’s favourite sons. After an 8 – year hiatus, Mansfield came out of retirement in November 2018 as the new host of the Hot 91.9 FM morning show. His gravitas and impact were instrumental at the Hot 91.9 FM Teddython 2019 which raised over R3.8 million in 12 hours. The return of his much-loved Christmas Wish has seen countless lives impacted through the incredible heart he has for people, a core principle at Hot 91.9 FM. His partnership with Sam Cowen and the rest of the team has resulted in a morning show that oozes ‘listenability’ and originality, which has created an incredible connection with his listeners. He is, quite simply, one of the best to have ever graced the South African radio airwaves.

Breakfast Show-Mansfield in the Morning

Mansfield in the Morning is everything a breakfast show should be: funny, edgy, and informative. Capturing the energy and essence of its target market, both geographically and demographically, Mansfield in the Morning, through the enduring partnership of Jeremy Mansfield and Sam Cowen, boasts content and presentation that is original, creative, exciting, and enticing. With award-winning production from William Scott, Mansfield in the Morning stands out for its engaging and relatable content. Throw in award-winning sports journalist stalwart John Walland and Stephen Kirker on the news desk, and Mansfield in the Morning emerges as a formidable outfit at ease on air, producing a product that is head and shoulders above their competitors while delivering real value for advertisers. The show has all the right ingredients including a large CSI component, consistent with Hot 91.9 FM’s mandate as a community station making a tangible difference in its footprint.

Mansfield in the Morning is so much more than just a get-up and go show; it’s the inimitable chemistry between Jeremy Mansfield and Sam Cowen, who is pivotal to the content creation on the show. With 25 years of radio under her belt, Sam’s quick wit, quicker tongue, and delightful humour add the distinctive sparkle that yields engaged listeners, relatable content, and the ‘je ne sais quoi’ to the winning formula that is Mansfield in the Morning. Coupled with the peerless talent of content co-producer Will Scott, the flagship show on Hot 91.9 FM demonstrates the adage ‘teamwork makes the dream work’ perfectly.

With over a decade of experience, Nobuhle Nkhoma is a journalist with the coveted ability to write balanced, informative, and engaging stories. Having worked in several newsrooms including at Kaya FM, eNCA, ANN7, and Channels Television Nigeria, Nobuhle is a multi-skilled individual with writing, editing, and investigative reporting experience.

Having received a SABC News Award for Best Student Journalist in Current Affairs in 2008, Nobuhle has become an invaluable addition to the Hot 91.9 FM News Desk.

Teddython embodies the spirit in which the radio station was conceived; fun, family, and community. It is through Hot Cares that we’ve awarded bursaries at all levels of education, assisted those in need of medical attention, and helped victims of unforeseen, life-changing circumstances.

Taking place as it has for three years now at the Sandton City Centre Court, the goal for Hot91.9FM Teddython 2019 was to raise R2 million to continue the great work we so love to do within our community. What began as the mammoth task of raising R 2 million turned into the extraordinary, breath-taking feat of smashing through the R3 million barrier! And almost touching the ceiling of R4 million. Tears of joy and relief flowed freely not only at Sandton City but in cars, homes, and offices around Johannesburg as we took a final tally; R 3.9 million was raised to continue to change lives in our community.

The award-winning Hot Sport on Hot91.9FM is a show presented by the highly experienced and well-loved John Walland. Featuring two topical one-on-one interviews of sporting individuals and previews and reviews on major sporting events by way of post-match analysis, Hot Sport truly stands out above the rest; this can be attributed to John Walland’s 35 years of experience. Drawing from his rather large little black book of big-name sporting personalities to produce Hot Sport, this daily show (Monday to Thursday) is a 30 minutes blitz of the day’s sports as well as developing stories in the local and international sporting world. John’s ability to strike the iron while it’s hot delivers relevant content and makes for compelling listening and a superbly curated and well-produced show; demonstrating his enthusiasm and passion for sports broadcasting.

Radio legend Kevin Savage takes the helm at noon on a Saturday on Hot 91.9FM with the Classic Countdown. Counting down the hottest songs of a given year, the show is dedicated to remembering the hits of days gone by and have you thinking “Damn, 1984 was a pretty good year of music!” Between the ’Old Skool’ tunes and Kevin’s dulcet baritone, his years of experience on radio translates into a show that is entertaining and informative, fun and engaging, and makes the Classic Countdown a must-have in your weekend radio listening routine.