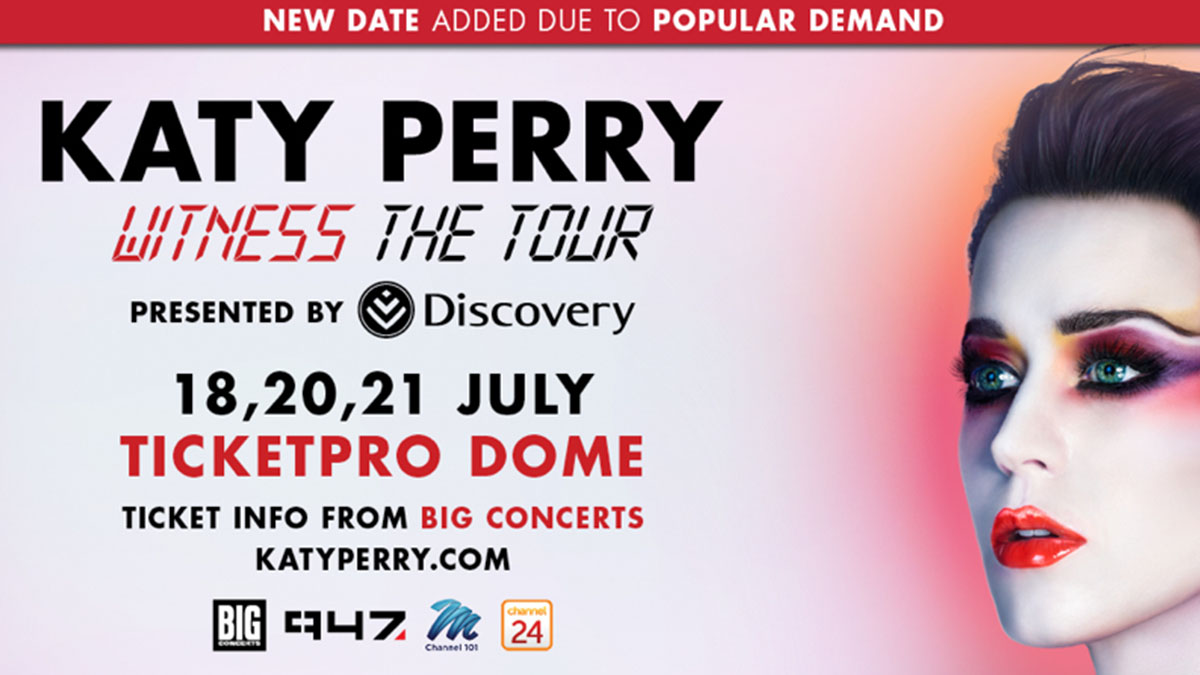 Due to exceptional demand a third and final date has been added for Katy Perry Tour in Johannesburg on 21st July 2018 at the Ticketpro Dome. Katy Perry will be performing in South Africa for the very first time as part of her Witness: The Tour. Tickets are selling quickly and fans are recommended to purchase quickly to avoid disappointment.

Discovery Card holders get an exclusive 48-hour presale from 14th March 2018 at 9am. Go to www.discovery.co.za for more information.

Tickets Go on Sale 16th March 2018 at 9am from www.bigconcerts.co.za

The North American leg, which began in September, has received rave reviews.

“Ms. Perry was as confident and adept onstage as she’s ever been” –The New York Times

“Enormous, colorful sets with eye-popping props, strong vocals that kept her at the front of top-40 live performers, and a presence now more refined than radicalized” – Los Angeles Times

“As concert productions go, Perry’s is the definition of top-notch and an Instagram dream: a highly choreographed, sensory overloaded assault that sparkles, swings, struts, and even flies.” – Variety

With Witness, Katy finds liberation, in the changes in her own life and in the world around her, delivering songs that inspire both thought and movement. The singles released thus far – the Platinum-certified “Chained to the Rhythm” featuring Skip Marley, and the singles, “Bon Appétit” featuring Migos and “Swish Swish” featuring Nicki Minaj – hint at the breadth of the musical and thematic elements found on Witness.

WITNESS: the Tour is an imaginative trip from outer-space to inner-space, from the planets to the bottom of our oceans, and a musical journey through Katy Perry’s biggest milestones and mega-hits right up to her latest album. The dramatically original staging means that there isn’t a bad seat in the house, when Katy brings out her band and dancers, along with all the bells and whistles.

WITNESS: The Tour is Katy’s first run since the sold-out, 151-date Prismatic World Tour, which concluded in 2015 and was hailed by Rolling Stone as “a show to damage retinas and blow minds.” Sponsors include KATY PERRY PARFUMS.

Katy made her Capitol Records debut with 2008’s One of the Boys after signing to the label in 2007. She cemented her status as a global superstar with the follow-up album, Teenage Dream (2010). PRISM, her 2013 album, debuted at No. 1 on iTunes in 100 countries and has sold more than 12.5 million adjusted albums worldwide. With the singles “Roar,” “Firework” and “Dark Horse” each surpassing the 10 million threshold including song sales and streams, Katy is the first female artist to earn three RIAA Digital Single Diamond Awards. In her 10 years with Capitol, she has racked up a cumulative 18+ billion streams alongside worldwide sales of more than 40+ million adjusted albums and 125+ million tracks. She is the most-followed person globally on Twitter, and the first to surpass 100 million followers.

Crowd free merchandise shopping before anyone else

Travel packages will be available from our exclusive domestic flight partner FlyMango. Visit www.flymango.com for travel and accommodation packages from Cape Town and Durban.