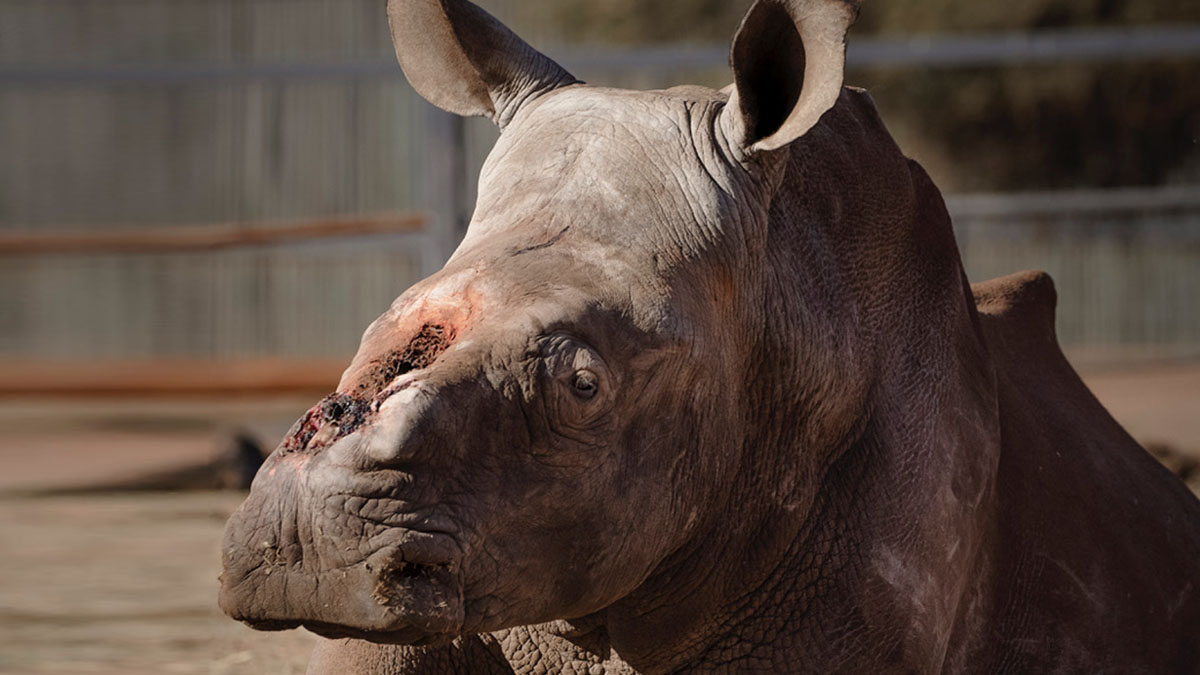 Rhino Seha’s journey back to the wild on 24 January

Seha’s journey: From massacre to majesty

He’s battle-worn and scarred. He has seen the best and survived the worst of humanity. He is Seha, a 10 year old rhino bull – and he’s going home.

If you were a rhino, 2021 would have been your worst year-end, as 36 rhinos were slaughtered by poachers in just 24 hours. The carnage was felt globally, and the famous Kruger National Park too is facing the strong possibility of local rhino extinction in just three years.

Now, from the blood red depths of this tragedy, a glimmer of hope. His full name is Sehawukele – “God have mercy on us” –  and fate brought him to another who doesn’t give up: Wildlife vet Johan Marais, founder of Saving the Survivors.

The poachers had ripped his horns from his face, leaving Seha disfigured and in unimaginable pain. Local police found him stumbling along the fenced border of the reserve, and the owners of the land suggested he be shot.

The police, moved by this bleeding mass of once-majestic beast, reached out to the well-known wildlife vet Marais, who has vowed to save every rhino that survives a poaching. Over the following six years, Seha endured 30 operations, crying with each one as these emotional animals are wont to do.

Marais managed to give Sehawukele enough facial function for him to eat. But instead of hearing lions roaring across his natural habitat, he had to be kept in a paddock.

Marais knew it was now time to make contact with Baby Rhino Rescue. Baby Rhino Rescue is an international organization that passionately believes in working together to make miracles.  Founder and president Helena Kriel asked Marais what his number one wish for Seha would be. “To get him back into the wild,” he said. Helena says, “This really is the miracle of Seha’s journey back to the wild. It’s what happens when people work together. I think it’s the message we really want to get across strongly. Inspire people and get involved.”

Baby Rhino Rescue’s American team launched the Seha’s Fund campaign. They had to raise funds to transport him, but couldn’t send him back to the wild alone. His lineage is magnificence; he has prize genes, essential for the survival of the species. He was to go into the wild with two breeding females and within a few months, the baby Rhino Rescue Team had raised the funds to buy Seha his mates.

On 24 January, Seha will feel again the African soil beneath his feet at the Big5 game reserve Marataba in the Waterberg. “50 rhinos used to live in this area,” says Andre Uys, MD of Marataba, of the 2000 square hectare piece of bush. “This is heaven for a rhino.”

It’s a horror-to-haven tale of the brutality of some, and the profound compassion of others dedicated to love and healing. Seha symbolises the worst of what humans can inflict; the unspeakable darkness and the cruelty. Conversely, he is remarkable too, in symbolising the best that humans can be.

This beautiful animal illustrates the power of a revered, ancient species: Six years after the most heinous attack, Seha is still standing. And he’s wild. This is a creature that does not want to go extinct.

The moment of majesty

Seha will soon be darted and transported to Marataba game reserve. When doors of his crate open and he smells the heart of Africa again, he will step into the bush and conquer a great injustice. He will leave behind his saddest moments and begin a new life. Sehawukele – God have mercy on us!

With permits in place, Seha will be darted on Monday 24 January and will be taken from Bela Bela wildlife farm to Marataba in the Waterberg, a 130km journey. On arrival, he will be taken to the area chosen for him, where the two females – Dakalo (Ducky) which means Joy; and Tshilidzi (Chilli), which is Grace; will meet him.

Saving the Survivors, Baby Rhino Rescue and Marataba are partnering to save the rhino from extinction. Each one, reach one – together we can send a call across Africa and the world about the rhino that wouldn’t give up and the vet that wouldn’t let him.

There can be little more apt to celebrate this majestic animal’s giant heart and future freedom than see him home with Joy and Grace.

For more information or an interview, please email Dionne Domyan-Mudie on Dionne@tpwagency.co.za or 083 326 1776.