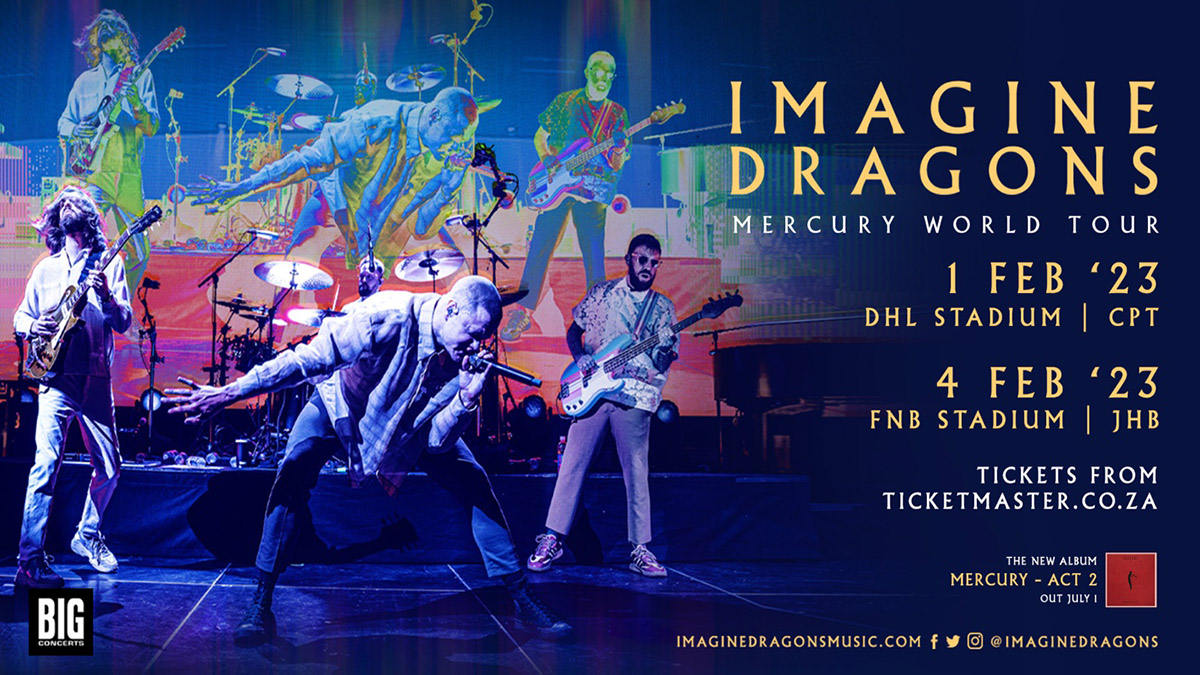 Tickets go on sale Friday, 8 July at 9 AM SAST from Ticketmaster.co.za

Multi-platinum Grammy award-winning rock band Imagine Dragons announce the South African leg of their massive Mercury World Tour.  Produced by Live Nation, the tour celebrates the release of their latest album, Mercury – Act 1 (KIDinaKORNER/Interscope) kicking off in Cape Town at DHL Stadium on Wednesday 1st February 2023 and then heading to FNB Stadium, Johannesburg on the 4th February 2023. This tour marks the band’s biggest shows of their career to date.

On the heels of “Enemy,” which has topped the Alternative Radio chart for the past seven weeks and is rapidly ascending at Top 40 radio (#10) and Hot AC (#9), Imagine Dragons unveiled their new single, “Bones,” the first new music from their forthcoming release Mercury – Act 2. A spirited examination of life and death, the song explodes with an infectious chorus that celebrates the intangible spark that ignites our beings. Listen to “Bones” HERE and view the lyric video HERE.

TICKETS:  Ticket sales open on Friday, 8 July at 9 AM local time from Ticketmaster.co.za.

​​With over 60 million album equivalents and 55 million digital songs sold, not to mention over 108 billion combined streams, Imagine Dragons are one of rock’s biggest bands of the past decade, and they’ve fully reinvented the genre in that time. In short, they own Billboard’s Top 3 rock songs of the 2010s — “Believer,” “Thunder,” and “Radioactive”—but their story doesn’t begin, or end, there. Formed in 2009, Imagine Dragons developed a grassroots following with a series of independent EPs before making their major-label debut on KIDinaKORNER/Interscope with 2012’s Continued Silence EP. That same year, their LP debut NIGHT VISIONS entered the Billboard 200 at No. 2, while lead track “Radioactive” topped Billboard’s Hot Rock Songs, won a GRAMMY® for Best Rock Performance, and achieved RIAA Diamond status. 2015’s Smoke + Mirrors debuted at No. 1 on the Billboard 200. EVOLVE followed in 2017, earning a GRAMMY® nomination for Best Pop Vocal Album and unleashing three No. 1 Alternative radio hits: “Believer,” GRAMMY®-nominated “Thunder,” and “Whatever It Takes.” All three songs were also top 5 hits at Top 40 radio, with “Thunder” taking No. 1. The band’s fourth album, ORIGINS, debuted atop Billboard’s Top Alternative Albums and Top Rock Albums charts, while its lead single “Natural” spent nine weeks at No. 1 at alternative radio.

For their fifth studio album—Imagine Dragons’ first new music since 2018—the band teamed up with esteemed producer Rick Rubin. 2021’s MERCURY – ACT 1 debuted in the Billboard 200 top 10, and at No. 2 on Billboard’s Top Alternative Albums and Top Rock Albums charts. It also launched the singles “Wrecked,” “Cutthroat,” and “Follow You,” with the latter reaching No. 1 on both Mediabase’s Alternative Radio and Billboard’s Alternative Airplay charts. “Follow You” marked the band’s quickest ascent to the top of that Billboard chart, surpassing the respective seven- and eight-week climbs for “Natural” (2018) and “Believer” (2017). Then came “Enemy.” Originally released as the theme to Netflix’s Arcane, the hit racked up more than 4 billion combined global streams across two versions (including a collaboration with GRAMMY®-nominated, Atlanta-based rapper J.I.D), helping make Imagine Dragons the highest streaming American band in the US in 2021. In 2022, they expanded the world of MERCURY with a double album, MERCURY – ACTS 1 & 2, including the single “Bones.” Sorting through personal loss and the biggest existential questions of their career, singer/songwriter Dan Reynolds says the two-part release is about learning to “accept the unknown” and “let go,” healing feelings Imagine Dragons are hoping to share with fans as they embark on some of their biggest shows ever this summer. Check out the full itinerary HERE.