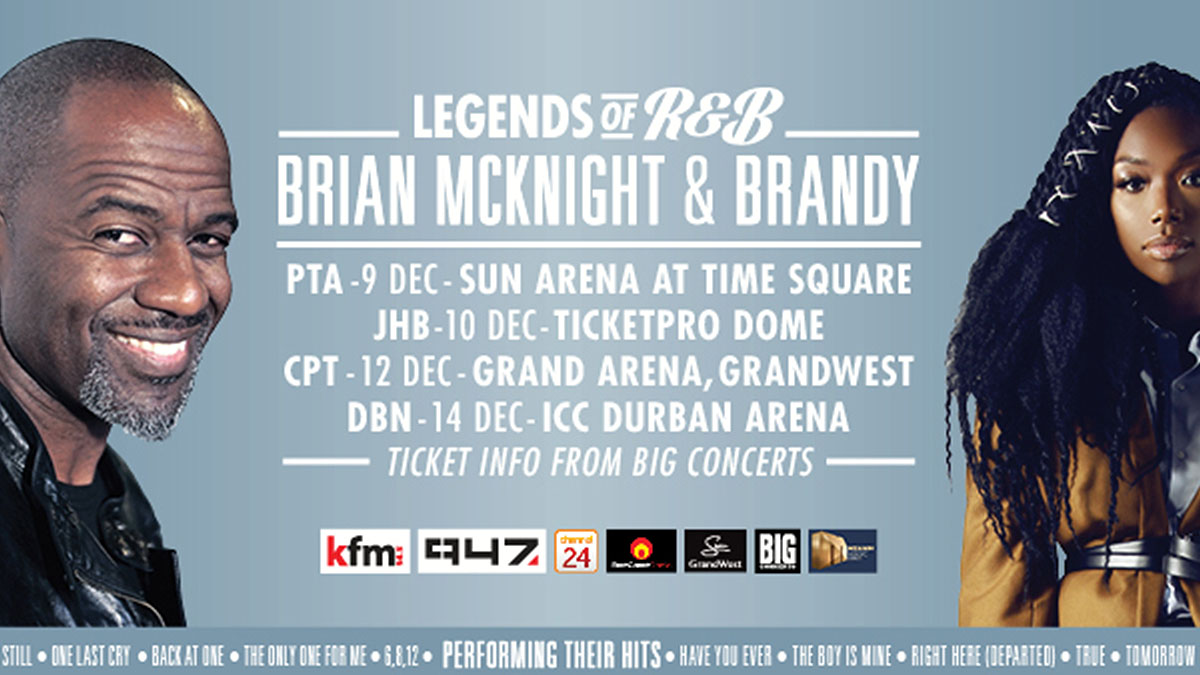 Legends of R&B with Brian McKnight and Brandy

LEGENDS OF R&B with Brian McKnight and Brandy

Big Concerts has confirmed The Legends of R&B, will be returning to South Africa in December 2017 featuring Brian McKnight and Brandy.

Tickets go on sale Wednesday 2nd August at 9 am from Big Concerts and Computicket.

As an artist who needs no introduction, Brian McKnight has earned himself a spot in contemporary music history. He has released 17 albums to date, with several going 2 and 3x platinum, and he has sold over 30 million albums worldwide. In addition to being a singer, songwriter, and producer, McKnight is also a talented and charismatic personality who has hosted “Soul Session Countdown with Brian McKnight” on BETJ. In addition, “The Brian McKnight Morning Show” on KTWV the Wave Smooth Jazz radio station, was a Top 5 rated show 2 years running. McKnight has also used his vast industry knowledge as a red carpet host for Extra! In 2007, McKnight stepped into Broadway with a successful run as Billy Flynn in Chicago. Now to mark his 25th anniversary as a recording artist, McKnight will debut his 18th album, Genesis, on August 25, 2017, which will be released worldwide through SRG | SONOS Recording Group and will feature the hit single “Forever.” As the lead single from Genesis, “Forever” quickly hit the Top 20 on Billboard’s Adult R&B Songs chart and continues to surge up the Adult R&B (Urban AC) radio charts all over the country.

Brandy has sold more than 40 million albums worldwide (including the 5x-platinum-selling Never Say Never) and is ranked one of the best-selling female artists in American music history by the RIAA, having sold over 11 million albums in the United States. During her reign, she recorded five albums: In 1998 – “Never Say Never,” 2002 – “Full Moon,” 2004- “Afrodisiac,” 2008 – “Human,” and 2012 -“Two Eleven.” Brandy has also earned scores of awards, including a Grammy, an AMA, two Soul Train Music Awards, two NAACP Image Awards, three Billboard Awards, four MTV Awards, six Soul Train Lady of Soul Awards, two Nickelodeon Kids’ Choice Awards, and three BMI Awards. At the top of 2016, Brandy released Beggin & Pleadin, a bluesy trap-soul melody that was greeted with much admiration. There is more to come as Brandy works towards recording her seventh studio album.

Tickets go on sale Wednesday 2nd August at 9 am from www.bigconcerts.co.za