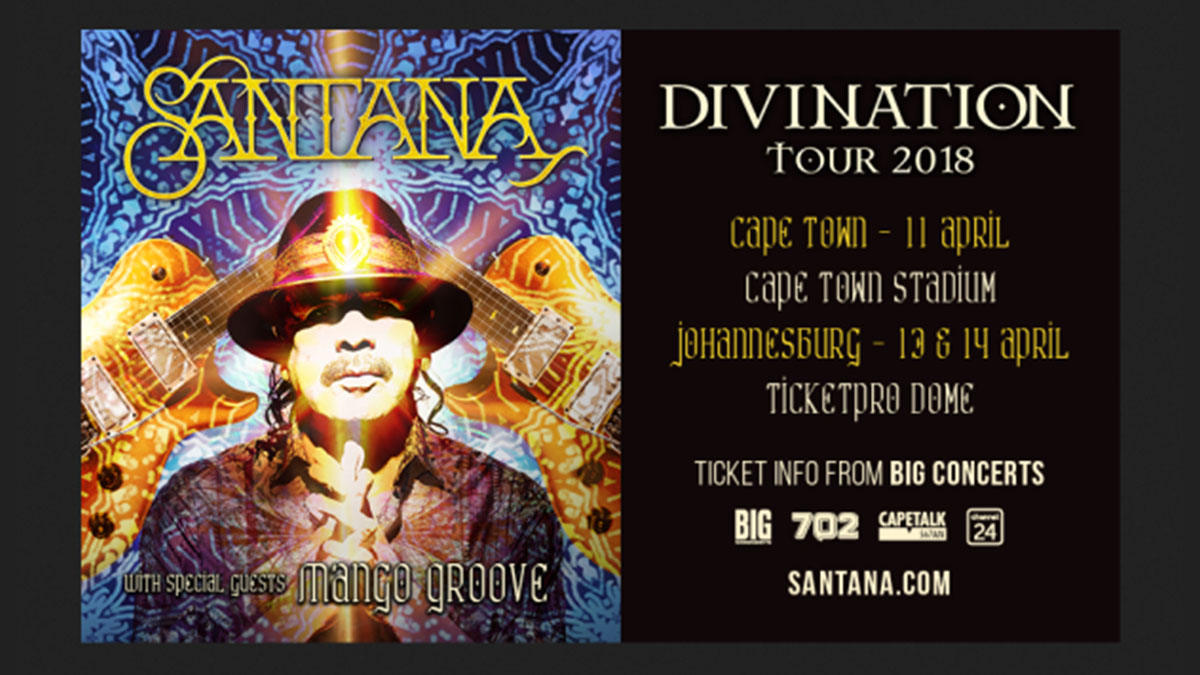 Big Concerts is pleased to confirm that Santana will be returning to South Africa in 2018 performing in Cape Town on 11th April 2018 at Cape Town Stadium (intimate configuration) and Johannesburg on 13th and 14th April 2018 at the Ticketpro Dome. Santana’s special guests will be local greats Mango Groove.

Carlos Santana, who first became famous in the late 1960s with his band Santana, pioneered a fusion of rock and Latin American music. His first Top 10 hit ‘Evil Ways’ stayed on the Billboard chart for two years and was soon followed by two more classics and Billboard number one albums ‘Abraxas’ (“Oye Como Va”, “Black Magic Woman”) and Santana III (“No One to Depend On”, “Everybody’s Everything”). To date, Santana has won 10 Grammy Awards including a record tying nine for a single project with 1999’s blockbuster Supernatural (“Smooth”, “Maria, Maria”).

Among many honors, Carlos Santana received Billboard Latin Music Awards 2009 Lifetime Achievement honor as well as Billboards Century Award in 1996. Having sold over 100 million records to date Santana has been inducted into the Rock and Roll Hall of Fame and is listed in the top 20 greatest guitarists of all time by Rolling Stone Magazine. In 2013, Carlos was the recipient of the 2013 Kennedy Center Honors Award. Currently, Santana is headlining at a multi-year residency at House of Blues at Mandalay Bay Resort in Las Vegas.

From Santana’s earliest days as a ground breaking Afro-Latin blues rock outfit to the mega chart topping collaboration of ‘Supernatural’. The sound of Carlos Santana is one of the world’s best known musical signatures.

Santana’s special guest will be Mango Groove, whose career has spanned an exciting and turbulent time in the history of South Africa. Since the iconic multi-platinum release in 1989, the band, together with its charismatic lead singer Claire Johnston, has gone on to become a household name in South Africa. To date Mango Groove have sold over a million albums. Putting it simply, nothing sounds quite like Mango Groove.

Tickets from bigconcerts.co.za and Computicket

You will receive an email a few days before the concert with all the relevant information.

Should you wish to book a corporate hospitality suite with a minimum of 20 guests for this event, please contact the Ticketpro Dome- 011794 5800 or email info@ticketprodome.co.za