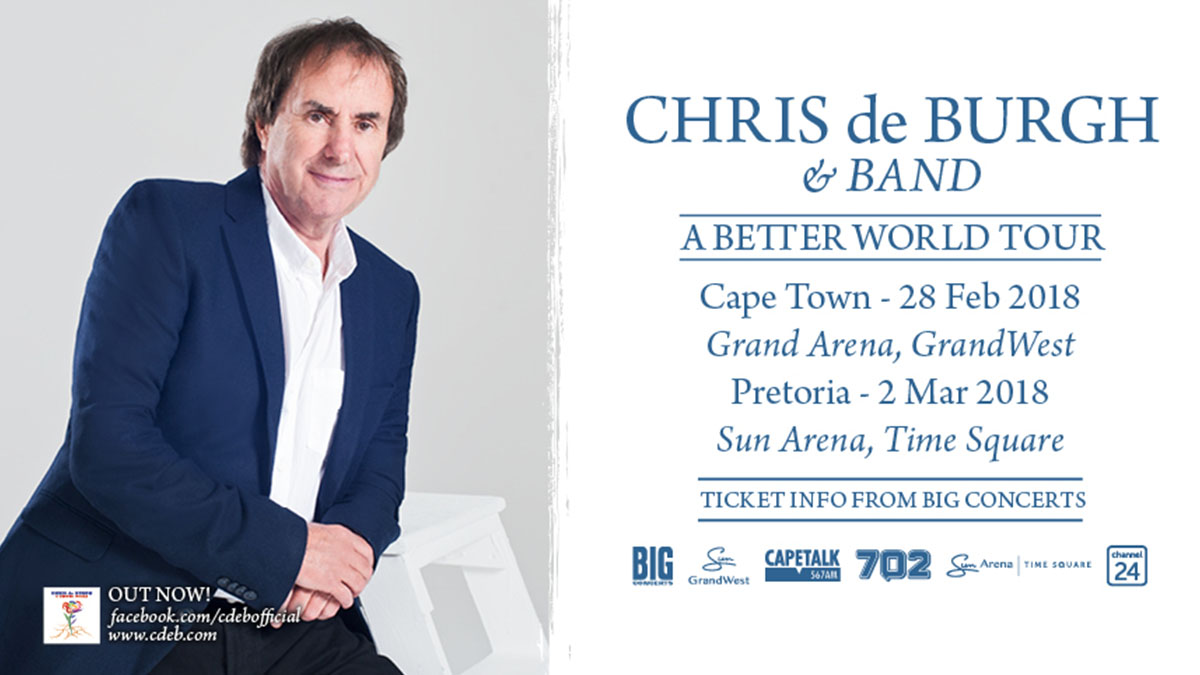 Few artists can lay claim to international success spanning three decades, but Chris De Burgh has achieved precisely that. The legendary artist will be performing two shows in South Africa in support of his new album, “A Better World”.

Tickets go on sale Saturday 16th December at 9am from bigconcerts.co.za and Computicket. Discovery Card holders get an exclusive 48 hour pre-sale from 9am on Thursday 14th December. Go to www.discovery.co.za for more information.

‘Spanish Train and Other Stories’ was Chris’ first major hit in SA and the first single ‘Just Another Poor Boy’ from this album was No.1 for many weeks.  By the time he released ‘Man On The Line’ in 1981, Chris was a well-established global star and the single from this album ‘High On Emotion’ became a No.1 record right across the globe. 1986 saw the release of ‘Into The Light,’ Chris’ most successful record up to that point, which sold in excess of 10 million copies worldwide. It also featured the single ‘Lady In Red’, which was no.1 in 50 countries and is still one of the most played songs on the planet.

By 1990 Chris’ popularity was such that he was the only international artist to personally receive an invitation from then-Chancellor Kohl to perform at the historic public celebrations marking the reunification of East and West Germany. Chris continually seeks new challenges for himself as a musician and in with his 1995 album, ‘Beautiful Dreams,’ he realised a lifelong ambition to have his music recorded in a classical style with a full thirty-two-piece orchestra.

Always in tune with global and political issues, Chris de Burgh provides much food for thought in the lyrical content of his new album ‘ A Better World’. Chris has crafted material that addresses many of the themes and topics which have always so richly and uniquely coloured his musical agenda; love, war and adventure, travel, discovery and home-coming, the past, the present – and the future. Stories, all of them, the songs offer an instant and clear insight into the thinking and imagination of one of popular music’s most evocative and accomplished songwriters, whose long and consistent career has so far resulted in sales of 50 million albums and sold out performances in concert halls worldwide.

Musically, ‘A Better World’ is a familiar de Burgh melting pot of diverse styles, tempos and instrumentation.  Ballads sit alongside anthems, solo performances with band or orchestral ensemble pieces.  Straight-ahead rock and pop songs are infused with regional flavour, from Caribbean to Celtic.  Guitar, bass, drums and keyboards are augmented by pipes, strings and brass.  Throughout, Chris’s voice is by turns powerfully clear and passionately sensitive.

It all comes together to continue, progress and enhance the unique musical footprint which Chris has created for himself while composing a career-long repertoire of more than 280 songs.

This tour also marks the 25th Anniversary since Chris De Burgh toured South Africa in celebration of the lifting of the cultural boycott and to date he has sold over half a million tickets over his 8 tours to the country. Tickets are expected to go quickly so head to www.bigconcerts.co.za to book.